“It is perhaps to do a disservice to both art forms to make too much of comparisons between Aboriginal art and art produced by self-trained artists and artists in institutions. However, it is true of both that ab initio they were not produced for the commercial art market, and were produced by artists who had no experience of the snares and ruses of that market or the peculiarity and irrationality of its attributions of value.

Aboriginal art is rooted in the telling of the ‘Dreamtime’ stories – the symbolic telling of the creation of the world. The ‘Dreamtime’ stories are reckoned to be over 50,000 years old, and have been handed down through generations over time. They are expressed in the complex symbolic language of the Aboriginal peoples and captured in a traditional iconography which combines with stories, dance and  song to pass on ‘Dreamings’ and so preserve the rites and maintain the development of Aboriginal culture in the face of settler opposition and state violence. However beautiful the works may be, their visual language is intended to serve a communicative and history-embodying rather than primarily aesthetic purpose. The works that now are produced on canvas, were, until the development of a commercial market for them, more usually produced by  painting on leaves, wood carving, rock carving, sculpting, ceremonial clothing and sand painting. 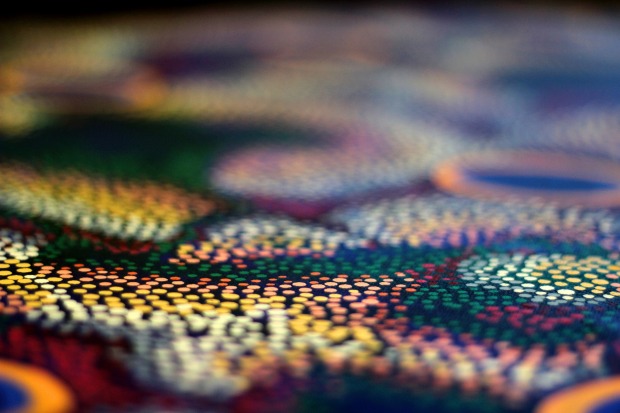 In this sense then, the comparison with ‘outsider art’ can be made – outsider art often expresses private mythologies which are communicated through complex, self-produced symbolic languages, and can be set down in a variety of media, often determined by the extent to which the artist has access to particular materials at hand.

Aboriginal art serves a primarily communal function. Its attraction for, and appearance within, the commercial art market is a secondary feature of the fact of its production. This is both its strength and its weakness. Again, the comparison to outsider art can be made.

As the artist Wenten Rubuntia put it in The Weekend Australian Magazine, April 2002

‘Doesn’t matter what sort of painting we do in this country, it still belongs to the people, all the people. This is worship, work, culture. It’s all Dreaming.’

As commercial art dealers and galleries made inroads into Aboriginal communities in the 1970s, they began to take advantage of the artists who had no experience of the commercial art world, its contractual or valuation norms, and in any event were not making art for the business of art – some artists recognised the need for self organisation.

As an example, artists at Papunya and Alice Springs observed first hand the development of the private art market and the exploitation of their friends and thus formed the Warlukurlangu arts centre. The name ‘Warlukurlangu’ derives from an important Jukurrpa (Dreaming) and means ‘belonging to fire.’ The name was chosen by a number of older men and women who saw the need for an art centre and endeavoured to form an organisation that represented their interests as artists but also recognised and determined to defend the importance of the cultural laws which are embodied in the stories depicted in paint. The establishment of Warlukurlangu was one way of ensuring the artists had some control over the purchase and distribution of their paintings.

As the market for Aboriginal art increased both with regard to the volume of works coming to market and the venality of that market, the Australian Senate initiated an inquiry into issues in the sector. It heard from the Northern Territory Art Minister, Marion Scrymgour, that Aboriginal artists were often tricked by backpackers into selling their art on the cheap, and that backpackers were often the creators  of purportedly  Aboriginal art being sold in tourist shops around Australia:

‘The material they call Aboriginal art is almost exclusively the work of fakers, forgers and fraudsters. Their work hides behind false descriptions and dubious designs. The overwhelming majority of the ones you see in shops throughout the country, not to mention Darling, are fakes, pure and simple. There is some anecdotal evidence here in Darwin at least, they have been painted by backpackers working on industrial scale wood production.’

The inquiry’s final report (Standing Committee on Environment, Communications, Information Technology and the Arts: Indigenous Art – Securing the Future of Australia’s Indigenous Visual Arts and Craft Sector) made recommendations for changed funding and governance of the sector, including a code of practice. The report itself is a classic fudge, a refusal to fully address the ethical and legal issues arising from the commercialisation of Aboriginal art. Thus:

‘There is no doubt that there have been unethical, and at times illegal, practices engaged in within the field of Indigenous arts and craft. There are probably still instances of these problems, and there may be people seeking to take advantage of issues within the sector by ripping off artists or art centres.’

‘In spite of all this, the committee urges everyone in the sector to recognise each other’s sense of commitment, and reap the benefits of co-operation, rather than sow seeds of rancour and division.’

The Committee refused to take a stance explicitly in support of the formal regulation of the art market in relation to its exploitation of Aboriginal art. In effect, it concluded that even bad business was good business, in that it allowed Aboriginal artists to benefit from the untrammelled joys of free market capitalism.

‘Much of what was claimed about business practices appeared to be based on hearsay, and there was little tolerance of the diversity of people and legitimate ways of doing business which might all contribute to the benefit of Indigenous creativity, Indigenous art and Indigenous prosperity.’

The ultimate outcome – self-regulation via a Code of Practice was far from ideal, but the Code of Practice itself makes for useful reading. In particular, the section on Dealing with Artists, which is produced below in full:

3.2 Agreements with Artists: An Agreement between a Dealer Member and an Artist in relation to Artwork (whether written or verbal) must cover the following key terms: (a) a description of the relevant Artwork(s), including the quantity and nature of the Artwork(s); (b) any limitation on the Artist’s freedom to deal with other Dealers or representatives; (c) whether the Dealer Member is acting as an Agent or in some other capacity; (d) the cooling-off rights (which must be in accordance with clause 3.3) and how the Agreement can otherwise be changed or terminated; (e) costs and payment terms for the Artwork (which must be in accordance with clause 3.4); (f) details about any exhibition in which the Artwork is to appear, and any associated promotional activities; and (g) any other information determined by the Directors and notified to signatories to the Code from time to time.

3.3 Artist’s Cooling-off Rights (a) An Artist or Artist’s Representative may terminate an Agreement within: (i) 7 days after entering into the Agreement; or (ii) such longer period as is agreed between the parties. (b) A Dealer must not require the Artist to pay any fees, charges, penalties, compensation or other costs as a result of the Artist exercising cooling-off rights under this clause 3.3.

The purpose of this article is to put forward a (relatively) simple proposition. If we can accept that there is a similarity in form and content between Aboriginal art and outsider art (both use complex symbolic forms and mythologies to tell stories through works which are not primarily produced for the art market, and both are produced by artists who (because of their socio-economic situation/confinement/lack of knowledge of commercial practice) are vulnerable to exploitation by the commercial art market, then we ought equally to be able to accept that there is a need for the adoption of a similar Code of Practice to protect the interests of outsider artists. The proposition therefore is this; all gallerists and dealers in outsider art should voluntarily adopt and display the excerpt from the Code of Practice above, as a statement of a commitment to dealing ethically with outsider artists, and all art workers, art therapists, agents and educators should make sure the artists with who they work are made aware of the relevant sections of the Code and educated in its rights, its  implications and benefits for them.”

‘Innocence is a splendid thing, only it has the misfortune not to keep very well and to be easily misled.’
― Immanuel Kant, Groundwork of the Metaphysics of Morals

**All images have been sourced from image-sharing websites