This is the final installment in a series of posts introducing American artist Clayton Landry*. In this post, collector and supporter of Landry’s work, George Lawrence, will focus on Landry’s depictions of animals and inventions.

Kate Davey: Landry’s representations of animals are also very interesting. They are almost text-book diagrams of a range of creatures: star fish, cats, deer. These works differ slightly from his naval images, as they are less reliant on descriptive text. Where do you think this fascination with drawing animals came from?

George Lawrence: Yes, I love the animal drawings. And most of them are very simple. I wish I had asked him more about them, but since we never spoke specifically about it, I can’t really say much about his impulse for drawing them.
.
A few of them are placed in settings, so I suppose that those drawings could be documentation of life experiences, like the navy images. One good example of this is the drawing he titled ‘Pumpies in the Breakwaters –Flying Fish’ (Image 30). This is a scene he would have likely observed on one or more of his many sea voyages. I have searched for a fish with a name or nickname like ‘pumpies’ but I haven’t found one yet. Maybe one of your readers has an idea? The text at the bottom of the drawing reads ‘When wings gets Dry Fall back in the water.’ I especially like the graphic quality of this drawing with the regular pattern and repeating shapes against a simple background.

A few of the other animal drawings with settings look like they may have been memories of travels or shore-leave experiences. One of these (Image 31) appears to be a farm scene with a farmer operating some kind of mechanized feeder for cows or pigs. This mechanism could also have been an idea for an invention. It looks like the date at the top reads ‘1987′ but the rest of the text is not legible. Another drawing (Image 32) shows a grouping of birds above a drawing of an elephant with a hay bail, each in a framed background. The text on the page reads ‘Drinking HO2 (sic) Birds snack and.. Elephant Break Bail.’ Maybe these were memories of a trip to the zoo.

Other drawings simply feature the animal isolated in a decorative border (Images 33 – 36). Perhaps these drawings were done just for fun – or for Landry to see how much he could recall about a creature from memory. Although the cats could easily have been Lower East Side residents and convenient models. 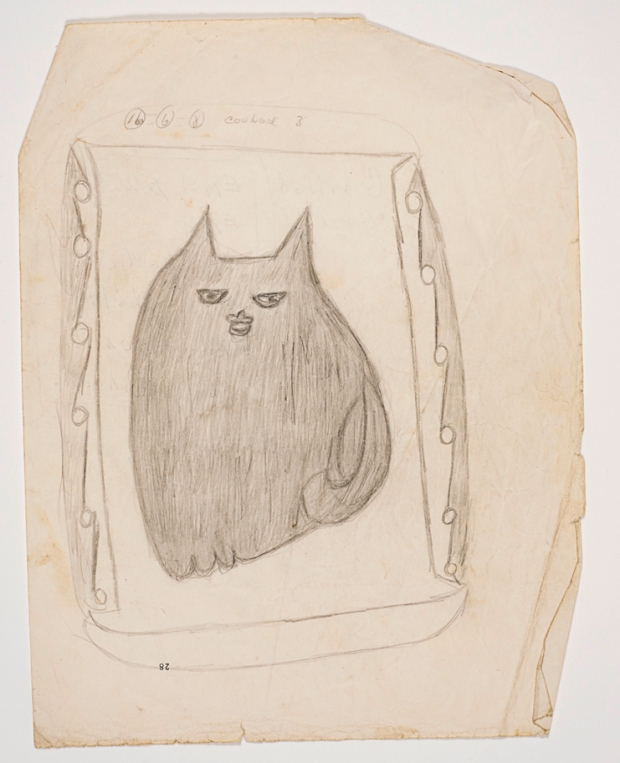 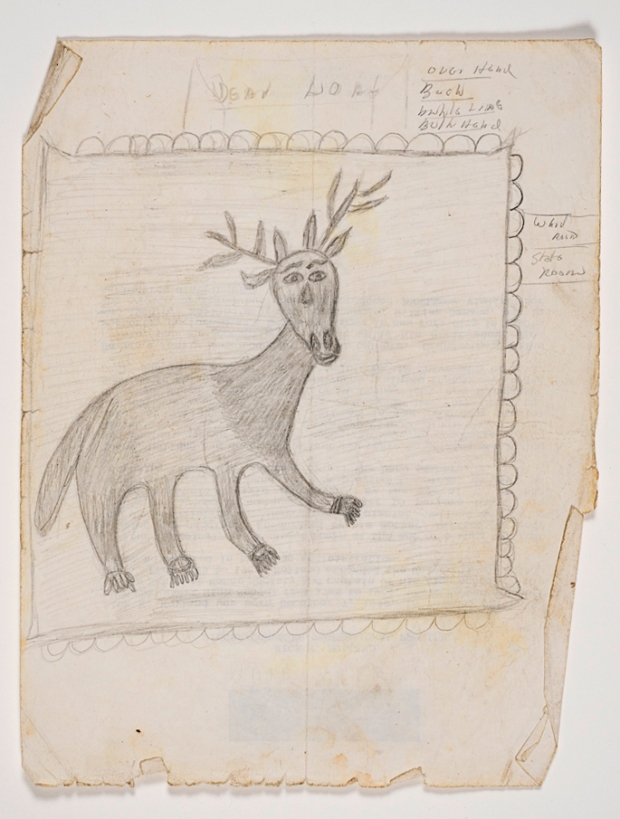 KD: A few of Landry’s ‘invention’ drawings focus on a traffic light bicycle and windmills. He has drawn the traffic light bicycle and variations of a windmill several times, sometimes presenting them with explanatory text, and sometimes just as a visual. It’s interesting, as inventions are often a common theme in work created by outsider artists. What relation do you think these invention drawings have to Landry’s life – was he a keen cyclist? Did he have knowledge of the workings of windmills? Or are these pure imaginative representations?
.
GL: This is another instance where I don’t have enough information to give you a proper answer, Kate. Unfortunately, we never spoke directly about the invention drawings. I have wondered about whether, if I had known him longer I would have seen more types of inventions. The examples that I have may be the ideas he was working on during the period of time that I knew him.
.
I doubt if Landry was a cyclist at the time I knew him, but he would have seen people biking everyday on the streets of the Lower East Side. And he would certainly have seen, as I did, bike messengers speeding deftly and sometimes dangerously through Manhattan traffic. Perhaps close encounters between cars and bikes were the inspiration for Landry’s ‘Bicycle traffic Light’ invention (Image 37). It looks like it is designed to alert people behind the bike as to whether the cyclist is speeding up, slowing down or stopping.

The other invention that Landry explored in several drawings was a windmill-powered outdoor oven (Image 38). Unlike the Bicycle traffic light, this invention is pictured in a sunny field next to a bordered bed of flowers – a setting that looks far from the streets of Manhattan. The text on the drawing is, conveniently, a recipe for Parker House Rolls.

The drawing in image 39 features both inventions, the windmill-oven and the traffic light bike together on the same page. An interesting detail to note is the circular gear-like symbol that has been added to the right of the oven. A scaled-down version of this symbol also appears next to the bicycle seat below. I’m not sure what this symbol represented to Landry but I think it may have been important. A much larger version of this same shape, intersected by the mast of the ship, also appears in the drawing ‘Knock Abouts’ that I discussed at the beginning of this interview (Image 40). We also see a shape at the top of the ship’s mast that looks like the light bulb from the windmill-oven. It makes me wonder if the symbol might refer to the use of an alternative energy source, and if what I thought was a fantasy drawing of a ship is actually a representation of a invention or a design for a prototype ship. Again – I would love to hear other ideas.

This is the final installment of a four part series focusing on American artist Clayton Landry. To read the previous posts in the series, please visit the links below:

*We have used Clayton Landry as a pseudonym for privacy reasons