In this extended post, writer Nick Moss reviews Jacques Derrida: Artaud the Moma (Columbia University Press, 2017). Moss critically examines Derrida’s writings about what it means for an artist – and subsequently their work – to exhibit in various institutions. 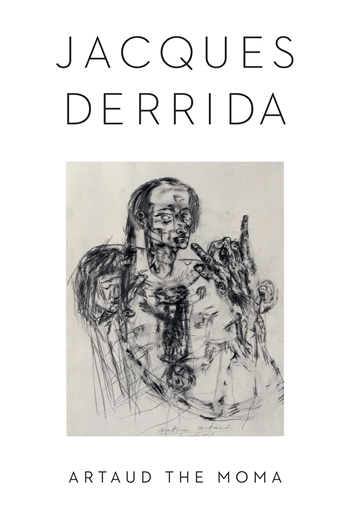 Jacques Derrida engaged repeatedly with the work of Antonin Artaud throughout his life. His best known essays on Artaud are collected in Writing and Difference (Routledge 2001 2nd ed.) As he states in the text reviewed here (a lecture given at the Museum of Modern Art in New York in 1996 on the occasion of the exhibition of Antonin Artaud: Works on Paper), Artaud represented for him “a sort of privileged enemy, a painful enemy that I carry and prefer within myself.” Derrida states that he is bound to Artaud by “a sort of reasoned detestation.” He is resistant to “what might be called, thanks to a certain misunderstanding, the philosophy, politics or ideology of Artaud.” The resistance to Artaud, though, is ultimately a resistance to Michel Foucault/Gilles Deleuze’s romanticisation of Artaud, “everything in this work that, in the name of the proper body or the body without organs, in a name of a re-appropriation of self, is consonant with an ecologico-naturalist protest.” For Derrida the re-appropriation of self is a myth, as is the privileging of some kind of end to alienation, especially if this is to be realised through any form of “schizo-politics.” As he makes explicit in his essay “Cogito and the History of Madness,” madness is always already internal to reason and thus privileging “madness” actually reinforces the divide that Foucault and Deleuze would seek to overcome.

Nevertheless, in the text given at MOMA, Derrida enters into a strategic alliance with Artaud, in order to save Artaud from the “museographic institutions” which, 100 years after his birth, seek to recuperate his work, to commodify that which was intended as resistance to “technical reproduction,” these works which sought to deliver a coup, a blow struck against “the Christian West, the god who steals my body, the spirit, the holy spirit and the holy family, all the forces-ideological, political, economic-that are one with this thief of bodies.” The “thief of bodies” is that “machination…the social, medical, psychiatric, judicial, ideological machine, the machine of the police, which is to say, … a philosophico-political network that allied itself with more obscure forces so as to reduce this living lightning to a body that was bruised, tortured, rent, drugged, and above all electrocuted by a nameless suffering, an unnameable passion to which no other resource remained than to rename and reinvent language.”

The drawings on display at MoMA were the sketches and drawings Artaud made while detained in the psychiatric hospital at Rodez. The works are, Artaud states, “deliberately botched, thrown on the page like some scorn for the forms and the lines, so as to scorn the idea taken up and manage to make it fall.”  It is in this ‘fall’ – in the art’s failing – that Artaud’s coup is struck. Yet every blow leaves a trace, a bruise, and so it is here – the works are ‘maladroit,’ they are ‘ill-fashioned,’ scorched by flame, but they survive to be archived and displayed. Artaud intended the drawings to be “not that of a man who does not know how to draw, but that of a man who has abandoned the principle of drawing and who wants to draw at his age, my age, as if he had learned nothing by principle, by law, or by art.” For Artaud the works are intended as weapons, not commodities, but they become commodified in any event. How then to restore, to protect, their existence as “gestures, a verb, a grammar, an arithmetic, a whole Kabbalah…that shits on the other,” to maintain their endurance as “a machine that has breath”? How to preserve the destructive essence (and we should be clear Artaud’s intent was destructive, not merely critical) of Artaud’s project against “the museographic management of its surplus value.”  As Derrida puts it: “Will it be possible to do what I am trying to do, to say ‘Merde?’ Will it be possible, either with or without blasphemy, to read and to cite ‘Shit,’ ‘Shit to art,’ to do it then as it must be done, in this great temple that is a great art museum and above all modern, thus in a museum that has the sense of history, the very great museum of one of the greatest metropolises in the new world?”

One of Derrida’s oft-deployed strategies of resistance was to introduce an element of slippage, or wordplay, puns, double-meanings, into his own texts, so that the text could never be reduced to a single canonical reading. He does the same here, with his punning on Artaud-momo (“idiot” as he referred to himself”) Artaud-MoMA, and on glyph/glyphe/hieroglyph/electroglyph. The words of the Derrida-text begin to echo the “glossolalic or glossopoetic rebirth of language” sought by Artaud. And we should not forget that  in these ‘botched’ works, which Derrida tells us were intended to do no less than “change the eye with the drawing,” produced in the period described by Artaud as “ten years since language left,” that language-as-writing is essential to these works – that words are strewn across their surfaces, inseparable from image. ”And ever since a certain day in October 1939 I have never written without also drawing.” (In this of course, Artaud stands as a precursor to Twombly, and to Basquiat – for all three, word and image can only exist side by side, so that the works become, as Katharina Schmidt has described them, a ‘meta-script.’) In this museum devoted to the commodification of the image, Derrida insists we go back to the words carved, hacked, scrawled, on to the surfaces. To hear the questions Artaud asked: “And who today will say what?” “And what do you yourself say?” – to hear, within the works, “Artaud interrogating a ghost of himself.”

Derrida battles with the “agony of an art that nevertheless, at the instant of its death, will perhaps survive its own apocalypse.” He seeks to retrieve Artaud’s project of anti-art, to cry “woe to whoever might consider them as works of art, works of aesthetic simulation of reality.” More than that – he uses the museum as archive against itself, and refuses to have Artaud’s voices silenced, so that the images are all that remain. It is Derrida’s determination to restore “the event as event.” And thus he seeks to allow Artaud’s words to come back, to haunt, but also, the sound of Artaud’s voice – at the beginning and the end of the lecture, from a recording of “To Have Done With the Judgement of God.” The ranting, scatological Artaud, “starving, drunk with rage against America.” The intent is to have the drawings address the viewer again “as if they were conducting a trial.” Such that “never before, when finding myself faced with drawings or paintings…never have I heard so many voices, never have I felt myself called, yelled at, touched, provoked, torn apart by the incisive and lacerating acuteness of a broadside of interjections so justly addressed to their addressee.” 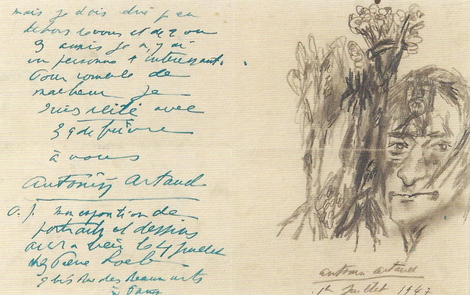 As to whether the strategies Derrida employs can succeed when Artaud is already entombed in the gallery space of MoMA – “especially MoMA in which Artaud the Momo would have right away identified the malevolent figure of the great expropriator”- we have to ask whether allowing the voice of Artuad-Momo to be heard can ever be enough, when Artaud himself declaims -against accusations of mysticism -that he has “always been body.” Can the body of Artaud-Momo – the anti-artist, the beaten, broken, electrocuted body (body of artist/body of work) stand in the way of “this great march of the symbolic market, from Paris to New York, from capital to capital, metropole to metropole?” 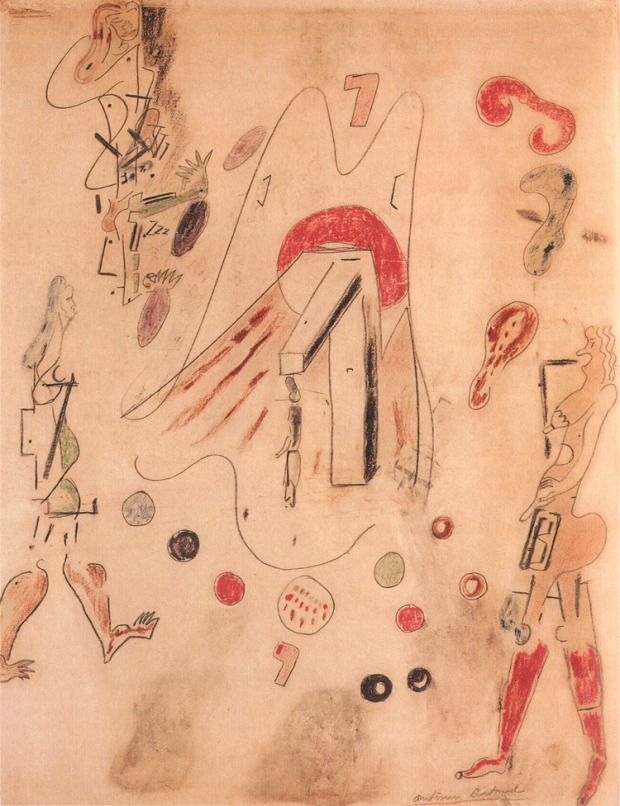 There is a further point to take up. In the book’s afterword, Kaira M Cabanas, associate professor of global modern and contemporary art history at the University of Florida notes that Jean Dubuffet presided over the Societe des Amis d’Antonin Artaud, and that he rejected Artaud’s work as Art Brut: “I find Antonin Artaud very cultured, not at all Art Brut.” There is much truth in this. Artaud’s rhetorical/scatological manoeuvres were pathologized as a way of neutering the content of his lacerating attacks on Church and State. But Cabanas seeks to take this as a prelude for a discussion about the purpose of outsider art more generally:

“Often the inclusion of outsider art is read as a progressive move within the modern and/or contemporary art institution, and in the early 2010s one witnesses how the art of ‘madness’, ‘outsider’ and ‘self-taught’ became the ‘new’ in the contemporary global circuit….this legitimation…occurs at the expense of what we might learn from the specificity of the work’s contemporaneity vis-a-vis the historicity of the psychiatric institution.” 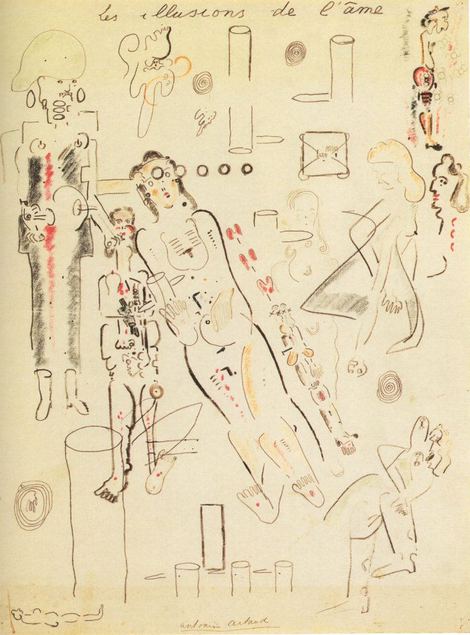 This is, I think, specious. I write as someone who is more than happy to adopt and preserve the perspective of outsider as a vantage point from which to view the contemporary art world. Nevertheless, I think Cabanas’s argument is crassly reductive and presumes a) that ‘outsider’ art has no aesthetic merit beyond its ‘specificity’ as art produced within a particular institutional context, and b) that the works’ ‘original meanings and values’ i.e. their place as works produced within/symptomatic of said institutions is diminished if displayed outside such institutions, so that the critical content of the work can only have effect within the context of its own production.

It strikes me that the opposite is true – that the exhibition of works produced outside the cycle of art-world luxury commodity production, which contain the ‘auratic’ to which Walter Benjamin refers as an auratic ‘trace’ of an originary trauma, might more likely impact on their audience as the lightning-strikes Artaud aimed towards, if shown outside their institutional context. When we encounter, for instance, Luc Tuyman’s Gas Chamber painting, do we dismiss all save the aesthetic, or does the political not there intrude on and shadow the aesthetic?

Artaud referred to “the innumerable necrophages that fill churches, police stations, army barracks, prisons, hospitals, university faculties.” We might note one of the many reasons for such complaint would be the determination of some academics to determine for themselves “who today will say what.”