In this blog, writer Nick Moss reviews two Mayfair exhibitions showcasing work by artists who could be considered ‘outside of the mainstream.’ In the post, he contemplates the implications of these displays and considers what we can learn from their curation and interpretation.

Two current Mayfair exhibitions appear to suggest that the Chinese wall between outsider art and the mainstream art world is beginning to crumble. We should perhaps then bear in mind that a Chinese wall is intended to protect the interests of both parties. Is what Jean Dubuffet characterised as a world of ‘competition, acclaim and social promotion’ the most suitable environment for encounters with art which is the antithesis of these? We can contend that what the art world hides behind its side of the wall is its exposure as an industry based on the commodification of artistic singularity, but we ought to consider whether preserving a space outside this might be a necessary strategy to maintain artistic autonomy at a  distance from what Dubuffet called the art world’s ‘fallacious parade.’ Or can art produced ‘intuitively’ survive its incarnation in a mainstream gallery setting?

Hauser and Wirth (23 Savile Row London W1S 2ET) are showing Ida Applebroog’s Mercy Hospital drawings.  In 1969, Applebroog was struggling with her mental health and chose to withdraw from day-to-day engagement with the world – the drawings helped negotiate her return. The Courtauld’s Jo Applin comments in the press release, “The Mercy Hospital drawings allowed her to draw herself back to life, back to herself, leading from catastrophic breakdown to a creative, personal and political breakthrough.” The work stands then as a record of  psychological crisis, and is described as belonging “to the long history of art created at a moment of ‘breakdown’, a period very often linked with creative ‘breakthrough’.” While it is clear that the work does reflect  a time of personal trauma, there is a danger that we are encouraged, as so often, to see the work solely in relation to this, and outside any aesthetic frame of reference – as if the art is no more than a crude clue to the artist’s psyche. 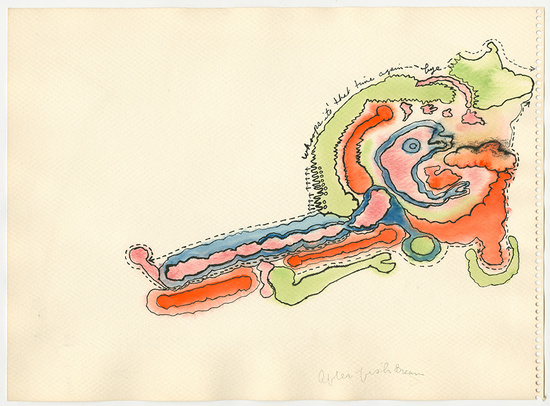 The Mercy Hospital drawings make use of a range of materials – black India ink, pencil, watercolour and pastel. Some are figurative, and depict bodies or partial figurative shapes and coils. Others are entirely abstract. Throughout, there runs a theme of shapes – seemingly intestinal or umbilical – curling protectively around other such forms. Some of the drawings have text inserted within – which far from simply illustrating “disorientation and isolation” as claimed, actually suggest that Appelbroog approached her circumstances with her sense of humour intact. “I’m just waiting for this to dry,” reads one inscription. One of the watercolours shows a group of figures standing in what appears to be a state of abjection, suggesting that withdrawal and isolation for Appelbroog was a positive choice. Other drawings have “Whoops! It’s that time again… bye,” in a scene where one shape seeks to feed from another. In a pastel sketch, a series of shapes appear to form a precarious tower. The writing reads: 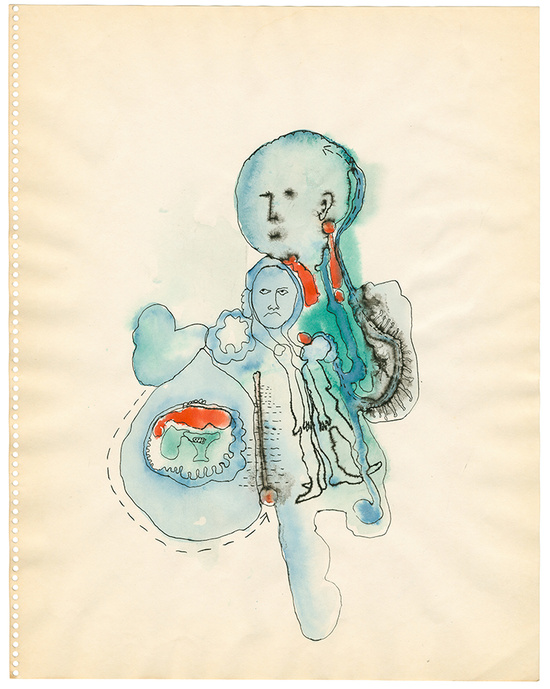 For all they are the product of crisis, there is something comforting about the softness, the intertwining of the shapes in the drawings. Colours blend rather than jar, and the shapes, while seemingly evidencing the artist retreating into and starting to use her art to dissect the forms of her own body, demonstrate a sense of unending curiosity rather than body-horror. This is work that is both unflinching and beautiful.

Marlborough Contemporary (6 Albemarle Street London W1S 4BY) is showing a range of drawings, including early works, by Susan Te Kahurangi King. These are, simply, a joy. One of the things that strikes you immediately is the continuity of drafting skill and of imagery and characterisation from the work of her youth to now. Susan’s world – its themes and personalities – have been there from the start. The work is also reflexive. Figures appear armed with paints and giant crayons, commenting on the production of the work, and perhaps showing the artist mocking her own pretensions. This can also be a comedically malicious world – characters are bitten and have their tails pulled. Meanwhile, others happily eat ice lollies and dance.

One of the refreshing points to note in the Marlborough Contemporary presentation is that the work is simply shown as the work of one of the gallery’s artists, who happens to choose not to speak. The gallery has hosted a ‘Drawing with Susan’ event, an interactive silent group drawing session with the artist on-site. If so-called ‘outsider art’ is to receive the recognition its artists deserve, then both these exhibitions show ways in which the art can be curated respectfully and imaginatively without stigmatising the circumstances of its creation.

One thought on “Review: outsider art comes to Mayfair”