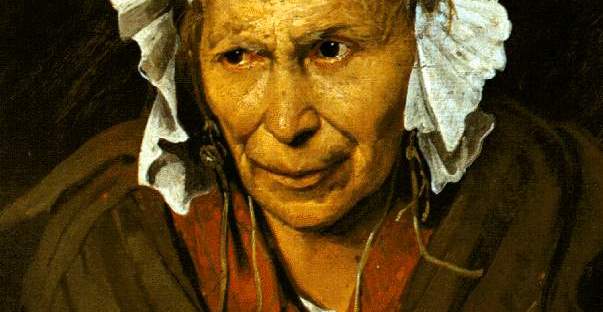 Although not strictly Outsider Art – I thought I would write a little bit about Gericault’s series of Monomaniac portraits, as they provide some insight into the changing ways mental health problems were viewed in the nineteenth century.

The term ‘monomania’ was first coined by French psychiatrist Jean-Etienne Esquirol, and it was an exclusively nineteenth century term referring to a person who was outwardly well, but harboured one obsessive fixation. The portraits themselves and the context within which they were painted raise many questions regarding the state of psychiatry and the treatment of the mentally ill at the time, the public’s view of the mentally ill, the progression of science and the morbidity and tragedy that art encompassed during this period. The reason for the portrait’s creation can be interpreted in a number of ways, ranging from the rarer thought that it was encouraged as a therapeutic exercise for Gericault by his psychiatrist, to the more widely received idea that the paintings were produced as part of a commission from psychiatrist Dr Etienne-Jean Georget.

In terms of psychiatry and the treatment of the mentally ill, the nineteenth century became, in theory, the century of the asylum. Before this period, in the eighteenth century and earlier, madmen had been incarcerated in overcrowded, abusive madhouses, alongside criminals and the terminally sick. The call for reform in hospitals such as these madhouses had emerged as early as the mid-eighteenth century; however, nothing was put into motion due to a fear that the public would disagree with a more humane and kinder treatment and attitude towards the mentally ill.The focus on the mentally ill was brought about by the French Revolution, which seemed to promise freedom and liberation for all those belonging to minority groups, and was somewhat responsible for the ‘unchaining’ of the insane.

It was Philippe Pinel, to whom the Revolution opened up a career in psychiatry, who provided the first instance where insanity had been depicted as having an external appearance. The prevailing theme within psychiatry throughout Pinel’s career was that a mentally ill person’s mind and body could not be separated; they were both equally affected by the illness. Jean-Etienne Dominique Esquirol, who coined the term monomania, was a disciple of Pinel. Esquirol laid out the idea of monomania in his 1819 article, published in the Dictionnaire des sciences medicales, and, at the time, monomania was widely assumed to have been brought on by the failures of the Revolution.

However, it was Esquirol’s gifted student, Etienne-Jean Georget, a psychiatric intern at the Salpetriere Hospital in Paris, who first suggested that monomania could be used as a defence in the courtroom. Georget insisted that monomania could not be seen by the everyday-eye; unlike Pinel and previous psychiatrists who believed that by using common sense, anyone could visibly tell a mentally ill person from the perfectly insance. Georget believed that it took a professionally trained eye to diagnose a patient with monomania.

It was Georget who commissioned Gericault to paint several of his patients suffering from monomania at the Salpetriere Hospital, the most likely reason being that the portraits would provide a learning tool for his students. Medical illustration had been around long before Gericault’s portraits, with Esquirol commissioning painters and sculptors to create the faces of the mentally ill for publication, but the monomaniac portraits lay in a separate box to these previous drawings; they live somewhere between medical illustration and traditional portraiture. When seen from a distance, the portraits appear to be fine examples of traditional, conventional nineteenth century portraiture; it is only when we move a little closer that we can see that these are something different. Gericault’s aim was to portray the dominant factors apparent in the face of a monomaniac that would enable a trained specialist to make a diagnosis; to do this, emphasis is placed on the features of the face, predominantly the eyes and mouth. However, he did not wish to depict them as mad in the traditional sense and because of this the results are hauntingly factual, unsentimental representations of the insane – some of the first of their kind. The portraits show the sitters looking straight past us, their gaze searching for or focusing on the object of their fixation, unaware that they are being observed. The male portraits are much more traditional; the sitters could almost be clients of Esquirol’s private “maison de santé”, whilst the female monomaniacs are shown as much more dishevelled; slumped, ill-dressed and mournful – undoubtedly patients of the Salpetriere.

It is interesting how Gericault has not created a backdrop behind the patients; no hospitals, no doctors and no wards that would enable us to mentally put these people within the confines of a mental hospital, and they are not performing any particular task or activity that might invite us to see their insanity. By doing this, Gericault has created mentally ill individuals, rather than a prototype for the ‘madman’ –  much as Goya did with his depictions of the madhouse, for example, his Los Caprichos, which show an almost “inhuman delirium.” What is noticeable within Gericault’s portraits is the way the face is almost lit up, whilst the body of the figure drops into the background. This enables us to think of monomania as a mental illness, that has no association with or impact on the body. The careful way in which the patients are dressed suggests that the act of posing for the portraits may have provided a therapeutic diversion for the patients themselves, as well as providing a learning tool for Georget’s students. By undertaking this commission, Gericault was essentially a part of the process that took place during the nineteenth century which altered the general public’s view of the clinically insane.

The monomaniac portraits are not the first example of Gericault’s interest in the victims of social injustice. His Raft of the Medusa, painted between 1818 and 1819, depicts the plight of those who fell victim to “incompetent leaders,” and his studies of the English poor, who roamed the streets during his visit to England, for example, the lithographs A Paralytic Woman and Pity the Sorrows of a Poor Old Man, contain similar characteristics to the monomaniac portraits; particularly when concentrating on the clothing within the pieces. When considering someone worthy for the task of depicting the traits of the monomaniac, Georget, although knowing Gericault personally, possibly also considered the artist’s previous associations with painting the less fortunate as a contributing factor as well as considering the artist’s previous involvement with hospitals for the mentally ill.

Gericault had become the first well acclaimed artist to complete a task that had previously been undertaken by mechanical executants, and so by doing this he had raised the status of the insane individual as well as bringing the depiction of the insane to a new higher level. Previous artists, such as Goya, had simply depicted the madman acting in a way that we would only assume a madman would behave; however, Gericault has created intimate portraits, which portray the insane individual exactly as they appear in life. By doing this, Gericault began to blur the line between the normal and the pathological. The portraits can be interpreted simply as a learning tool for Georget’s students, or, possibly more correctly, they can be interpreted as an illustration of the period of change that took place during the nineteenth century in terms of the perception of the insane. No more chains, no more incarceration, just the acceptance of the insane man as an individual.

Gericault, through his fascination with the victims of social injustice, was well suited to the task in hand, and, when the portraits were finally made public, undoubtedly helped with the progression of a more humane treatment and attitude towards the insane.