After taking part in this year’s PARIS OUTSIDER ART FAIR (with Outside In, where I am the Communications Officer), I can see the transformation that is visibly taking place within the outsider art field. With major galleries (albeit predominantly from the field itself) from all over the world taking up a stall at the fair, the ‘cabinet of curiosity’ idea of outsider art exhibitions gone-by seems to have well and truly disappeared. The younger sibling of the lauded New York Outsider Art Fair, the Paris incarnation is quickly growing legs, and this was no more apparent than this year in the centre of such a cosmopolitan city with a constant stream of visitors: art lovers, collectors, and curious passersby alike.

Martin Phillimore, Albert and Shinya Fujii’s work on the Outside In stall

In previous years, the Fair has been held at Hotel le A, with each stall having its own intimate hotel room showcase. This year, it had a much more Fair-like air at the Hotel du Duc; a grand conference and event venue located near the Paris Opera House.

This year the Ricco/Maresca Gallery from New York set up shop on this side of the Atlantic for the first time, London-based England & Co had their debut in Paris, and Australia was represented in the form of Coo-ee; specialists in Australian Aboriginal Art. In addition to the dealer stalls, there was a programmed talk featuring psychologists, psychiatrists, artists and curators, focusing on sexuality in the work of Henry Darger, Eugene von Bruenchenhein, Aloise Corbaz and Miroslav Tichy, and a specially curated corner of work by Japanese artist Shinichi Sawada. 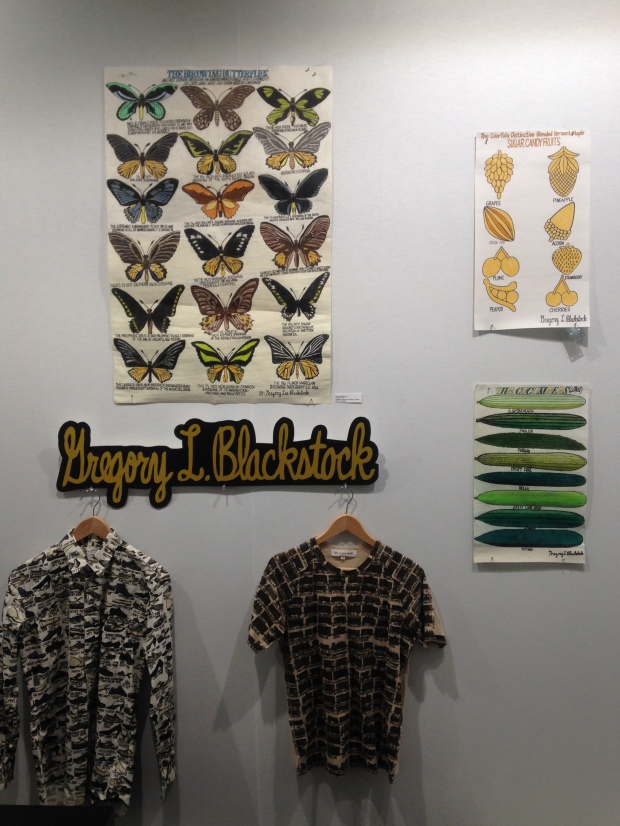 What was refreshing was that, if you were unaware as to the title or contents of the fair, you could so easily have believed it was a very-much-mainstream-art-world-art-fair. The stalls were curated to an incredibly professional level, and the quality of work on display was unquestionable. It was fantastic to see work by some of the big names there in the flesh: Henry Darger, Bill Traylor, George Widener, and Martin Ramirez. But what was equally fantastic was the huge number of emerging artists brought to the fair by galleries who so obviously respected their work, and who so obviously respected the artists. At the Outside In stall, we were representing Bali and Buddhism inspired ink drawings by Japanese artist Shinya Fujii, whose work has only ever been exhibited outside of Japan on one other occasion. It attracted a huge amount of interest, and it was so wonderful to see people returning at the end of the day to say they had fallen in love with it; they simply couldn’t go home without it.

I was really pleased to see work by ‘anthropologist’ of the everyday, Gregory Blackstock, presented by the Garde Rail Gallery from Austin, Texas. Blackstock creates visual lists based on what he has experienced, memorised and then regurgitated. These include Monsters of the Deep, Classical Clowns and The Irish Joys – amongst hundreds of other categories. I spoke to Karen Light-Pina from the Garde Rail Gallery, who discovered Blackstock’s work in 2003. This interaction was typical of the fair; being able to meet and talk to a gallerist who personally knows the artist.

Carlo Zinelli pieces seemed to pop up on several stalls, perhaps a sign that he is flavour of the moment. Zinelli was diagnosed with schizophrenia during his time volunteering for the Spanish Civil War in 1939 and was soon placed on medical leave, where he was committed to a psychiatric hospital in Verona. After ten years, he was admitted to a painting atelier created by sculptors Michael Noble and Pino Castagna, where he painted for hours every day with tempera paints and coloured pencils – often on both sides of the paper. His works are bright, bold blocks of colour, telling the story of his childhood.

There were several exhibiting artists present at the fair, including Cathy Ward whose scratchboard works were presented by Galerie Toxic. I saw Cathy many times, deep in conversation with visitors who were visibly excited at being able to ask the artist herself about her own work; her inspiration, her process, her style. And I think Cathy was equally as keen to share her work with visitors in person. French artist Marie-Rose Lortet had a solo exhibition of her lace architectural structures and faces with the Marie Finaz Gallery, and was herself present at the stall on several occasions.

There was something about the rawness and the depth of the work that made the Fair unlike any other. Fairs can at times be at risk of becoming a caricature of the commercial, corporate, hard-sell, but this was far from it. This was about enjoying the work, and enjoying the artists’ stories. There was a sense of camaraderie between the stalls, despite the fact that many were competing for sales and displaying works by the same artists. I think this camaraderie came from a want to protect the artists on display, but all the while shouting from the rooftops about how talented they are.

Overall it was great. It is so refreshing to see this kind of art having a stage like this; a stage that has been a long time coming, and a stage that many mainstream artists and mainstream art galleries can take for granted. Far from being the ‘European version’ of the New York Outsider Art Fair, it was noticeable that this was in fact an international event in its own right and it is without a doubt becoming a key date on the Outsider Art calendar. I look forward to next year’s incarnation!